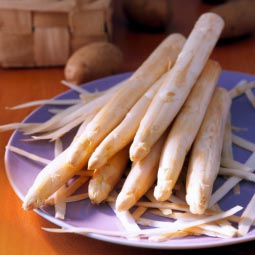 To celebrate the best season of the year, all four restaurants of Paulaner Bräuhaus Shanghai are offering traditional white asparagus dishes.

White asparagus is a symbol of spring in Germany and its annual arrival is a cause for national celebration. During its short season, roughly from the end of April into early July, most Germans eat asparagus as often as they can. Most typically it is savored with melted butter or sauce hollandaise accompanied by new potatoes and ham or prepared as a creamy soup.