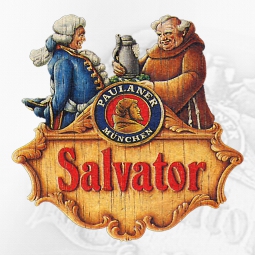 Paulaner’s Salvator Beer is an incredibly rich and hearty bodied brew with an intense malty aroma and high alcohol content. The chestnut brown beer with its caramel colored foam comes along with an enticing flavor. Starting on March 2, you can enjoy this historic and delicious brew until supplies last in our Paulaner Bräuhaus locations @ Raffles City Changning, @ Xintiandi, @ Binjiang and @ Expo.

The Salvator Bock Beer is the original founding beer of Paulaner. The first brew was done in 1634 by the St. Paul monks in Munich – the founders of the Paulaner Brewery. This strong beer should help the monks through the difficulties of Lent in anticipation of Easter. It was considered as “liquid bread”, since it is extremely nutritious and strengthens the health during the fasting period. Originally brewed for their own consumption, after a while they started to sell it to increase their monastery budget.

Paulaner’s Salvator Beer was the first strong beer ever brewed, and today, Paulaner is still the only brewery in the world that is licensed to brew it. Like the other beers of Paulaner, it is brewed according to the 1516 German Law of Purity, a strict brewing guideline that is considered one of the oldest food preparation laws in the world.